Le Lignon’s central building measures over 1 km. It is the largest rental complex in Switzerland. There is a real quality of life in this neighbourhood of 6,500 inhabitants, but there are also certain tensions between older residents, newcomers and young adults.

It was the year 1974. Michèle Finger remembers her arrival in Lignon, in the canton of Geneva. She was in the car with the man who was to become her husband. The urban development stretched out before her: one kilometre in length, 2,780 homes and 84 streets. “It was unimaginable, immense. I just couldn’t imagine a building so big,” she recalls. Once inside, Michèle felt reassured. “My partner was living in a four-room flat. It was well laid out and full of light. The view was magnificent and the flat was completely unoverlooked. It was strange, but we didn’t feel like we were stuck inside a housing project,” says this former accountant, originally from Porrentruy. Time passed, the children moved out and now Michèle and her husband are preparing to move into a house under socio-medical supervision. But they won’t be going far from Le Lignon.

Genevan developer and architect, Georges Addor (1920-1982), head of this project which was originally intended to house up to 10,000 people, would have been delighted to hear Michèle’s words. “People’s happiness. This is the main concern for an architect building a complex of this size,” he stated in 1966 before RTS (TV channel in western Switzerland) cameras. “Once a person has understood that they will have four neighbours around them, 15 floors above or below won’t change a thing,” explains Addor, scion of the canton’s real estate elite. “He was a left-winger in a Maserati,” says the architect Jean-Paul Jaccaud, when describing Addor. His office took part in the energy refurbishment of 1,200 apartments in Le Lignon, a project which was awarded a prize at the end of 2021 by the German-language magazine “Hochparterre” and the Zurich museum for design. The work was spread over ten years and cost 100 million Swiss francs.

Everything about the story of Le Lignon is impressive. To start with, the project was set up in record time. We are 5 km from the centre of Vernier. There was space to build in the area designated by the canton for development without creating an urban sprawl. During the first stage, between 1963 and 1967, 1,846 apartments were completed. “Today, such speed would be unthinkable, just like the design of a project like this, in fact,” observes Jaccaud. The creation was modern and functional. The canton and the municipality of Vernier aimed for social diversity. The great snake of Le Lignon, with its streets sloping gently towards the Rhône, offers identically designed apartments, whether for social housing or private ownership. All of the properties offer front and rear views. The prices vary depending on size and floor. As an example, Jean-Paul Jaccaud mentions a six-room apartment costing 2,800 francs per month. 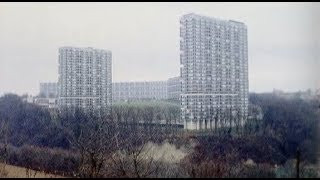 We enter the neighbourhood by passing under an archway. The inner side of the serpent is silent. We walk on, sheltered from the traffic. The carparks are hidden below great lawns. Designed by landscape architect Walter Brugger, the public area is dotted with fountains and squares. The ground floors are open to view. A great stairway in white stone provides a gently sloping path down to the Rhône, “like a street from the Middle Ages”, says Jean-Paul Jaccaud. Georges Addor built upwards and in a line in order to make the most of the 280,000 square metres of land available for the whole project, with an identical area of habitable floor space at the end. The central building is not just long, but also very high, reaching 50 metres at some points. Until the 1990s, the higher of Le Lignon’s two towers was the biggest in Switzerland. “There aren’t a lot of buildings like this which have aged so well,” comments Jaccaud.

On the tenth floor of the smaller of Le Lignon’s two towers, which are the complex’s prime locations, we visit an apartment which has just been renovated. The work enabled a 40 percent improvement in energy performance. The initial design was not bad, notes the Genevan architect. Having a lengthy building effectively limits the number of walls to insulate. On this January morning, the sunlight floods the rooms. The view is magnificent, with the Rhône river on one side and the Jura on the other. Another of Addor’s tricks: the two towers in question were built up from the lowest point in the land, “to avoid them becoming too prominent”, explains Jaccaud.

“Once a person has understood that they will have four neighbours around them, 15 floors above or below won’t change a thing.”

Genevan developer and architect, head of this project

Everyone agrees that Le Lignon is a town set in the countryside. It also allows its inhabitants autonomy. At the heart of Le Lignon is a shopping centre on one floor. There is everything there that you could need: a tea-room, a restaurant, a bar, a cobbler, a hairdresser, a post office, a butcher and a clinic. There is also a protestant parish building, a catholic church, a multi-sports ground, a games library, a space for teenagers and two school groups.

Former priest Michel Monod is at the complex every Saturday, helping and chatting to teenagers. Foto Stéphane Herzog

Every Saturday, former pastor Michel Monod, who has lived here since 1973, stands between the Migros and Coop supermarkets to greet the passers-by. “Technically, it is a perfect complex,” he says, before lamenting the lack of connectivity between the inhabitants, in this urban project which is home to 100 different nationalities. “It is the reign of mass individualism,” he believes.

Young adults in need of a sense of “home”

Monod co-manages the Le Lignon neighbourhood contract, which aims to help people to achieve community projects. Every day, he goes to a canopy located below the Le Lignon performance hall. From there, away from prying eyes, young adults from the neighbourhood meet up, and sometimes warm themselves around the fire of an improvised fire bowl. Michèle Finger knows the spot. This group of young people, who smoke and drink beer, listening to rap music, give her a feeling of insecurity, in a complex she finds increasingly unfamiliar. Of course, the Fingers’ rent is low, at only 1,200 francs for a 5-room flat, with expenses and parking included. But this resident, who is involved in several of the neighbourhood associations, complains of the rubbish that piles up at the collection points, spit found in the lifts and the fact that young people congregate at the ends of the streets. “I don’t know the people who have recently begun renting in my building. People don’t even bother to read the neighbourhood paper anymore,” she says, highlighting the lack of interest amongst Le Lignon’s “new outsiders”.

A social worker in Le Lignon since 2012, 39-year-old Miguel Sanchez is familiar with this discourse and understands the discomfort. “With its low rental prices, Le Lignon offers a solution for people from migrant backgrounds. This ethnic and social diversity, in a generally more strained economic context, maybe makes networking more complicated than in the past,” he comments. “But Le Lignon is not a “bedroom community” like you find in France. It is well equipped and well maintained. In fact, young people are proud to live here. There have never been any big problems in terms of safety or crime. It’s more a question of incivilities,” explains the socio-cultural counsellor.

In fact, Michel Monod attributes qualities to the young people around the fire bowl that seem to be missing amongst other residents of Le Lignon: “they are extremely loyal in their friendships. People tell me ‘lock them up’; I tell them: they’re your children.” He, too, found the neighbourhood to be out of all proportion when he first arrived. “I said to myself: it’s not possible to live as if we were in a termite mound, and I made it my mission to unite the people.” But he, too, loves Le Lignon.

Cold weather: the trademark of La Brévine, even in summer