Swiss, Tamil and a global star

The Swiss singer of Tamil descent, Priya Ragu, has achieved worldwide success with her single “Good Love 2.0”. The daughter of Sri Lankan refugees, brought up in St. Gallen, her story is one of liberation.

Priya Ragu appears on our computer screen dressed in a grey sweatshirt and sipping a coffee. The musician, aged 35, politely agrees to the interview, organised by the Warner group, with whom she signed in August 2020. The singer has been giving one interview after the other in the context of the release of her first album in September.

“Damnshestamil” offers ten bright and lively pop songs, crossed with the sounds of South Asia. “When a girl says she’s from Brazil, people find that cool. When I say I’m Tamil, people don’t associate it with anything. It’s not glam!” the rising start tells us, laughing. Priya’s husky yet smooth voice has thrilled listeners, with hundreds of them declaring their love for her on social media. “She mixes the sounds of two completely separate worlds. No one makes music like her,” states one message posted under the music video for the song “Kamali”, which has almost half a million views on YouTube. 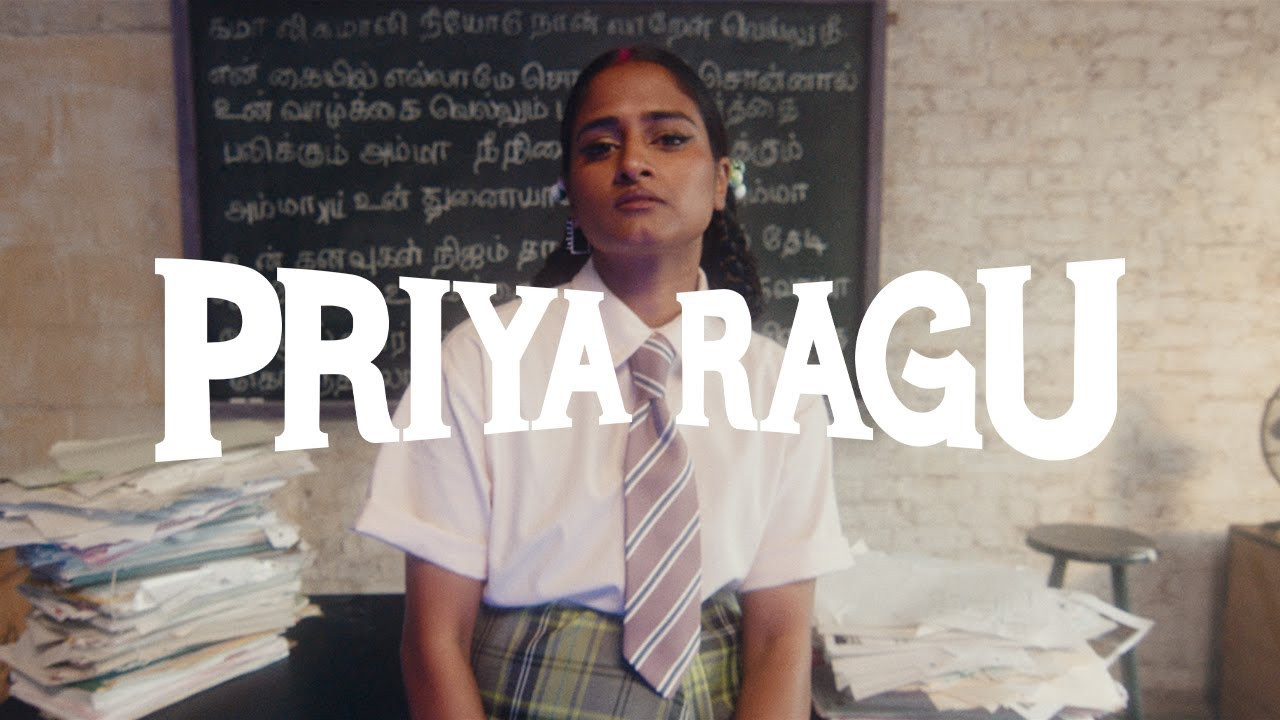 A childhood between two worlds

Priya Ragu has already overcome a succession of barriers that render her success all the more impressive. She is female, she is the daughter of refugee parents, she has brown skin, she grew up in a very conservative world and she made her breakthrough at a late age. “I only see the barriers I’ve broken through when I look behind me,” comments the singer from her flat in London. This is the story of a girl born into a family of refugees from Jaffna. They fled the civil war that shook Sri Lanka from 1983 and which ended with the defeat of the Tamil Tigers in 2009. Ragupathylingam, her father, was an accountant. He was also a musician. “He was a well-known singer. But working as a Tamil musician in his country ended up being dangerous,” his daughter tells us. Priya’s mother, Chandrika, taught typing. After a passage through Germany, the family settled in St. Gallen, with their young son, named Roshaan.

“It’s a sort of miracle for refugees to be able to start their lives again in a country where they are not necessarily welcome.”

The young Priya was to grow up in a stable, but very strict environment. Her father worked for the post office. Her mother was an assistant in a pharmacy. “It’s a sort of miracle for refugees to be able to start their lives again in a country where they are not necessarily welcome,” remarks Priya, who has Swiss citizenship. At school, she was one of only two girls with brown skin. She experienced some rejection. But for the most part, her integration went well. “I spent so much time crossing between two worlds, I sometimes forgot the colour of my skin.”

At home, Tamil music and Kollywood cinema, produced in Tamil Nadu in the south of India, kept alive the culture that her household did not want to forget. Each weekend, the family invited round friends and Priya’s mother would cook. Roshaan would play the organ and Priya and Ragupathylingam would sing. Spoons and buckets were used for percussion. The little band would also play at parties. When asked to talk about her parents’ country, Priya shares memories tainted with sadness. Her links to the island are tenuous, and yet the Tamil culture radiates from her life and thus her music.

A spiritual journey to New York

As an adult, Priya Ragu left the family nest to move to Zurich. Trained in accounting, she was hired by Swiss to sell aircraft components. For years, she flirted with the idea of making music professionally, like her brother, who had already thrown himself heart and soul into the career. In 2017, she left her job and flew to New York. Each morning, Priya would write and meditate. During the last month of her half-year stay, Priya, who had moved to Brooklyn to an apartment with a recording studio lent by the American rapper Oddisee, began to compose. Roshaan, alias Japhna Gold, also had a small recording studio in a shared apartment in Oerlikon. The two musicians exchanged rhythms, melodies and texts online. Japhna suggested incorporating Tamil percussion, and bingo!

Priya returned to Switzerland, where she was rehired by Swiss. Her salary was now used to fund recordings and produce music videos. Ragu music mixing R&B, soul, rap, pop and chants from the Indian subcontinent had arrived in Oerlikon. In 2018, “Leaf High”, for which the video would be filmed in Paris, was posted online. “Lighthouse” followed, with a video shot in Mumbai. Priya heard her music on the public radio SRF3, where the two musicians had sent their track. The fourth song to appear online was “Good Love 2.0”. The track was pushed in 2020 by Irish DJ Annie Mac, a star of the BBC. The sounds of the St. Gallen singer were heard by “New Musical Express” and “Good Love 2.0” was used to accompany players of the video game FIFA 21. In August 2020, the singer signed with Warner UK. She was interviewed by “The Guardian” and quoted in “The New York Times”. A fact worth noting: the ten tracks of “Damnshestamil” were almost all recorded in Oerlikon. Ragu’s style has something familial and artisan about it.

A discourse on the freedom of women

Priya would like to use her music to break down the stereotypes attached to Sri Lankans, “which essentially limit them to the role of cook, cleaner or seller”, she explained to the online journal “Decorated Youth”. In “Kamali”, a song inspired by a documentary, the artist tells the story of a little girl from Tamil Nadu, brought up by her mother, who supports her passion for skateboarding in a world which does not allow for this possibility. “I want to talk to all the Kamalis in the world, to encourage them to look far ahead of themselves. If we are capable of creating life, imagine what we can create when we break free of our barriers,” writes Priya. “My mother, who appears in the track’s video, was particularly moved by the life of the mother of Kamali, who had to fight. Her opinion on the place of women in society has changed,” explains the singer, who practises Thai boxing.

The dream of this Tamil-Swiss citizen, as she sometimes presents herself to preempt questions, is to organise a big music festival in Jaffna one day, with Tamil artists from all over the world.

Extraordinary acoustics on the outskirts of Berne

Will the Alpine pasture season soon have UNESCO status?

Swiss, Tamil and a global star

The printed book lives on