The little house that serves as Alan Roura’s base when he is in Switzerland is located high up in the port town of Versoix. It is just a stone’s throw from a suspended motorway and a boatyard where old sailboats are kept. Behind the gate hides an immaculately tidied workshop. Georges Roura, the father of Genevan sailor Alan Roura, works there as a tinsmith. Welcome to the abode of the Roura family. Alan Roura meets us at the door, friendly and relaxed, having returned to dry land on 11 February after 95 days of racing across the ocean in the Vendée Globe.

Let’s go back to the beginning of the story. The young Alan initially found himself on a boat for practical reasons: his parents wanted to save on rent in order to prepare for a voyage on the sea. He was two years old when his mother, Myriam, and his father, of whom he is the only common child, bought a boat on the lake and moved in. Moored in Port-Noir, Geneva, the Almyr measured 10 metres in length. The little yacht housed both parents and the four children of this newly-formed family unit. Alan grew up across from La Rade, the Geneva City waterfront. “We slept three children to a 4m2 cabin at the back. It was the height of luxury,” the Genevan tells us. Having never set foot in school, he concedes, “I’m not an intellectual.” At the weekend, the family would roam Lake Geneva, a prelude to their voyages on the sea.

A family on the water

Next to the Almyr was moored the Ludmila, a yacht measuring 12.5 metres. The family purchased and renovated it before heading off to Port-Camargue. “My father dreamt of setting sail. He was not a sailor, or someone who read tales written by sailors. He is someone who lives for himself, not through others. He obtained his sailing licence, and we learnt everything on the sea.” At the time of departure, the family had no set plan. The Ludmila carried the whole family, except the eldest sister, who stayed in Geneva, to the West Indies. The trip took a year, with the father teaching mathematics and the mother teaching French. After four years of travelling, the Rouras returned briefly to Europe, only to set off for the Caribbean again. Their intention was to work at each stop along the way in order to fill the kitty.

Working for a nabob in the Caribbean

The family was now travelling with two children aboard. They made their way following the winds and the work. In Venezuela, seven months of work in a shipyard ended in failure: their salaries were not paid. Next they headed in the direction of Martinique, and another shipyard. A phone call took them to Grenada, where millionaire Georges Cohen was building a palace on a private island. Georges Roura headed a team of eight locals, whom he trained in metalwork and tinsmithry, arts which later flourished in the area. Alan managed a little port. “That job was the worst,” jokes Alan. But the bosses were pleasant and the family had a cottage on stilts. At 15 years old, Alan would take nabobs, including Serge Dassault, on offshore fishing trips.

Later, the crew was reduced to just Georges and Alan. They took the Ludmila to the Pacific Ocean. The boat was 40 years old with the autopilot out of order. The two Swiss reached Tahiti after 22 days at sea. “We slept at the helm.” Alan was 17 years old.

Alan Roura doesn’t come from a background in regattas, but from the sea.

sailor and expert in sailing history

Today, he describes his father, who briefly enters the kitchen during our interview (svelte, white hair, weather-beaten hands, intense expression, smiling and direct), as an excellent sailor. How does he define an excellent sailor? “Someone who is able to go from point A to point B, whatever the weather, and who gets their boat there in good condition without taking pointless risks,” summarises Alan. Later on, the duo would narrowly escape an accident at sea caused by damage incurred off the coast of New Caledonia. Some makeshift repairs amidst waves of 10 metres managed to save them.

The call of offshore racing

The Rouras’ trip on the Ludmila ended in New Caledonia. That was where Alan first experienced offshore racing. “Unlike other Swiss sailors like Dominique Wavre, Alan Roura doesn’t come from a background in regattas, but from the sea,” notes Genevan Bernard Schopfer, sailor and expert in sailing history. 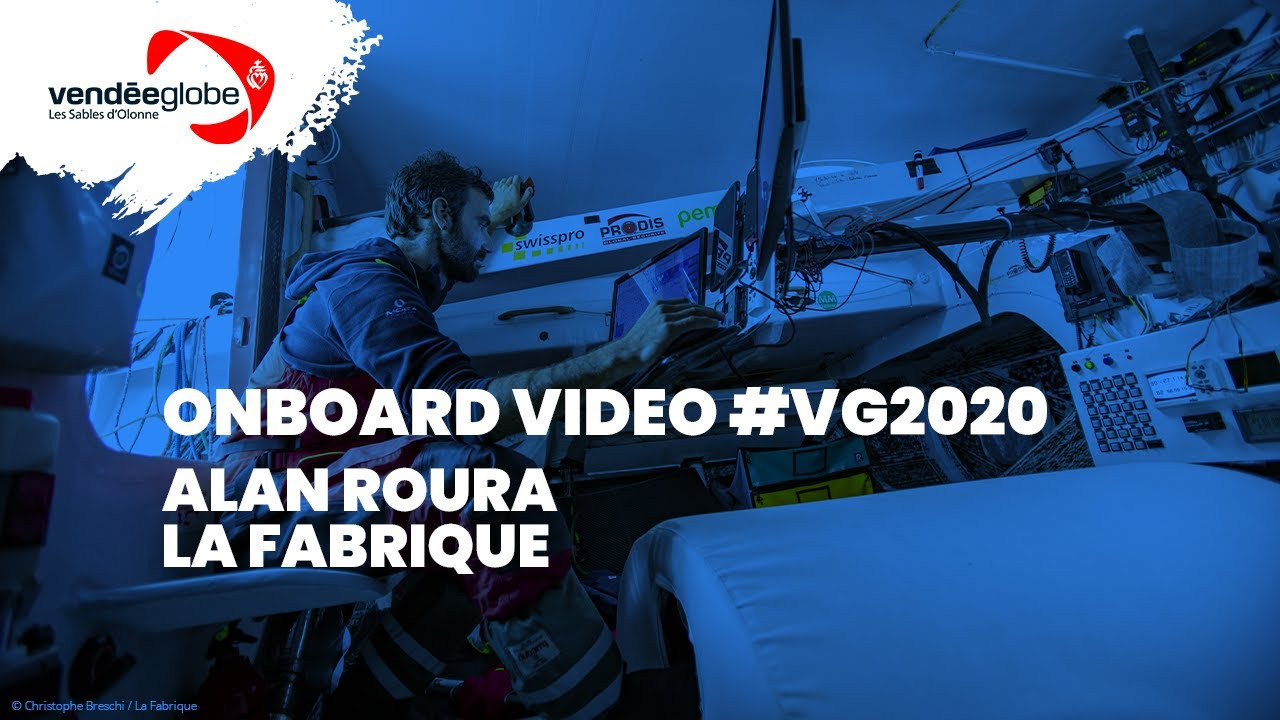 Gifted with prime technical and practical experience of the sea, Roura notches up all the classics: Mini-Fastnet, Mini Transat, Transat Jacques-Vabre. At the end of this journey, the young man comes across the Vendée Globe, known as the Everest of the seas. He completes the race twice, both times as the youngest sailor.

The 2016–17 edition, in which Roura finished 12th, was an adventure falling into the category of discovery and pleasure. In 2021 he finished 17th, after the vessel was damaged twice and after sailing half of the race with a keel stuck in the axis.

La Fabrique, the second of its name, is an IMOCA yacht built by Switzerland’s Bernard Stamm in 2007. “I wouldn’t last two days in a boat like that,” remarks Bernard Schopfer. “As long as everything is going well, it is a yacht like any other. But as soon as there is a problem, you realise how powerful it is,” explains Alan. A spinnaker in the water? Count up to six hours of work to get the 400 square metres of canvas back onboard. A gybe using this sail? The manoeuvre will take around an hour. The boat functions as a sounding board. “The constant movement means it is impossible to relax your body.” In terms of comfort, “there is a bucket used as a toilet and a bottle that you press for a shower”. For land-lovers or pleasure-boaters, the speed of an IMOCA yacht would be terrifying, with highs of 30 knots and above (60 km per hour). “Once you’re used to it, you feel like you’re going really slowly at 20 knots.”

Once the race was over, Roura and his team returned to work immediately. “We are looking for a new sponsor, Swiss, if possible,” says Aurélia, Alan’s wife, who handles communication. La Fabrique had been sponsored by the eponymous bakery brand, based in the canton of Vaud. The Vendée Globe is a full-time project.